We are on our way.  I'm sitting in the passenger seat of a mini-van with teammate Kevin Gottlieb at the wheel and our guest rider, Sam Sautelle from Australia, riding caboose.  The Who is playing on the radio with Justin Mauch and Zac Felpel a few cars ahead leading the way in the first leg of the trip towards Minneapolish, MN.  To continue the tradition of every race we've driven over two hours to this season, it's raining.

My mind is all over the place after my first crash of the year.  I had been knocking on wood a lot lately attributing my form to the fact I've been able to train and race with less time on the deck than last season.


Crystal City from Patriot on Vimeo.

This crash is just insane.  For years I've been saying that there would be a serious crash in this out and back section of the Crystal Cup course in the Air Force Classic and of course I fall victim.  What the video doesn't show is a cyclist from the main field clipping the official as the official seen laying on the road tries to clear out of the way to allow the breakaway that has about thirty seconds on the field led by the Volt pace car is about to come through.  The incident is unknown to anyone in the main field and we come out of the final corner of the course upwards of 30mph causing a whip that creates a chain reaction of the riders behind having to accelerate out of the corner to maintain position.  I always took the outside line due to the shield from the draft and of course having no idea the field would have to jump three car lanes right to avoid the chaos the crash caused right in the middle of the course.

Honestly, I don't know how I didn't break anything besides my bike trying to bunny-hop the official, whom I've heard is okay.  I rolled over my handlebars and the instinct to try and bunny hop kept me gripping the bars saving me from breaking a wrist or collarbone.  I walked away and got cleaned up in the ER with tons of road rash and a deep gash in my elbow being the worst of my injuries.

I hate that the crash is my race report for Crystal Cup.  I was very much hoping to write how I managed to sprint to a top ten and move up to a top 5 in the overall omnium for the 2-day event.  I raced a very patient race and kept myself out of trouble as much as possible and had literally just warned Sam to "stay safe" because with less than 10 laps to go in the race the pace was increasing and I was expecting it to get a little dodgy, but not like that.  Never like that.

The Air Force Classic might as well been a venue for a new discipline of racing, cyclo-criterium or crit-cx, with the amount of obstacles and potholes in both courses.  I had a run-in with a motorcycle official the day before as well:


KBS from Patriot on Vimeo.

I had just lapped the field with seven other riders in the 100 lap, 100 kilometer, and 500 turn Clarendon Cup and was making my way towards the front following Clay Murfet as best I could.  He saw the moto while trying to make a move up the outside and with myself having the same idea and less visibility,  I instinctively locked it up and had to power-slide narrowly missing a catastrophic crash at close to 30mph.

Clarendon Cup ended a lot better getting to pull on the Most Courageous Rider jersey on the podium in front of my friends, showing them that I wasn't completely crazy for quitting my job.  I finished 6th on the day.  It was my third year doing this race and I was dreaming all week prior about getting a result.  The harder the race, the better my chances. 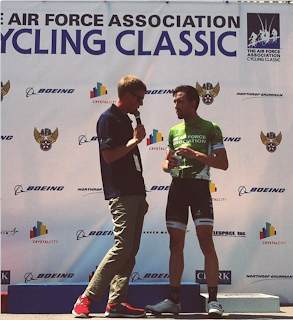 The sky finally cleared up.  We're already passing Hagerstown with Youngstown, OH being the end of the first leg only four hours away.  This isn't how I wanted to start the trip.  It's not easy.  But I'll finish this trip better than I started.  And I think that's the point of this trip.  If you can end up better than you started, you're headed in the right direction.